I know it’s been a few days since the last posts. But I had a wealth of information, and/or gossip come my way about the spooky “help me,” voice I was hearing. If I remember, the last episode ended with me confronting one of the night staff .

The blue coats that wander around, mostly annoying you, but every once in a while helping you with a menial task.

So I had been told by one blue coats (P.A.) to talk to the night shift about noises in the place. At first Janis, she has a name, didn’t want to answer my question about night sounds, but eventually, after promising not to say anything, she told me that the 5th floor (the floor above mine) has weird noises and voices all the time.

All the blue coats knew about it. And the sounds almost always came from the room above mine.

I told her the story of how I kept hearing a muffled “help me,” voice, that I thought was coming from next door. But when I went into the hallway, I could only hear Mr. Williams, my neighbor talking incessantly to Alexa. But the “help me,” voice stopped in the hallway.

But I heard it again when I went back in my room.

So there was the start of an explanation.

Jumping to lunch that day in the dining room, I have mentioned a woman in her 70s who dresses in glitzy broadway clothes, two outfit per day, and how I wanted to know her story.

Was she deranged, or just bored?

She’s the one that I made up the story about her throwing cornflakes at a waitress. That is the only thing that I’ve made up, and it’s not even out of character.

She has constant squabbles with the wait staff as well as some of her demented neighbors, but during this lunch, she pulled over her favorite waitress and I could hear her telling the “help me” story.

As soon as I saw her leaving, I got up and caught her in the hallway. Introduced myself. Yes, she had seen me. And what’s more her apartment was next to the “help me,” apartment on the 5th floor.

I told her I had heard it for hours in my room, but very muffled. She said that this has been going on for a few months. That there was a very old woman in that room who has been here since the place was built. And that that morning, they finally did go in and were surprised to see another demented patient (we’ll call her Sally) sitting in a chair – she may have said a rocking chair, because this second patient normally sits very calmly in a rocking chair in the lobby, benignly watching what’s going on.

So this morning in the help me room, Sally has turned belligerent and won’t leave. She weighs in at under 100 lbs but it took four young blue shirts to pull her from the chair.

Then the old lady in bed tells them that Sally has been wandering into her room, almost every morning, and won’t leave.

So that explains something. I also found out from the multi-outfitted woman that – and you can take this with a grain of salt – she never wore glittery broadway outfits like this until six months ago when she decided she needed a hobby to keep her sane.

And for what it’s worth, to me she seemed perfectly lucid. But I’ve been mistaken about that in both directions before. People I thought were crazy turned out to be sane and visa versa.

The other thing I learned from her was that the CEO retired a few months ago, and the place has been going downhill ever since. That I believe. And that has been confirmed by other resident-patients.

So you’re all caught up. No ghosts, spooky noises on the fifth floor, a man who loves Alexa next door, and the door just opened: blue shirt: I’m here to make your bed.

My name is David Beckerman. I am a fine art photographer working in New York City. Or I was before I had two strokes. I now write from Assisted Living. 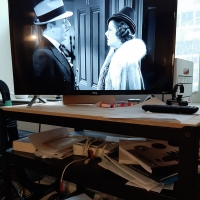 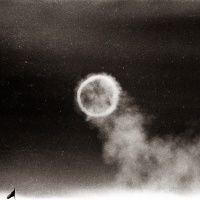