Just a few quick notes. I found out where the “hep me” voice was coming from, and why I hear it even now in my room. The quick answer is that there is a blind guy here, he dresses like Tom Wolfe in white linen (I think) suit every day, and I’ve run into him sporadically in the med waiting room.

Just so you know, I have nothing against blind people, in fact my parents worked at Vacation Camp for the Blind when I was very young, and I was used to dealing with the deaf and blind and mute and all sorts of disabled people.

But this linen guy is too much. He expects to be waited on hand and foot. And the voice made sense too. Remember I said I couldn’t tell if it was male or female?

True, he has a high pitched voice, not like a woman, but not like a man either.

And he would sit across from me with a plastic cup of water (they give you that to take your meds) and when he was done he would hold the half empty cup out and say,
“Help me. Help me.”

He could have just put the cup down on the table next to him, he sits in the same chair day after day, but I guess he wants the attention.

And he will literally go for two hours at a time when he’s in his room: “help me, help me.”

I learned this from Lorry the cab lady who lives on his floor, two doors down from him. She said they had to petition to remove him from their dining table because he kept knocking everything over.

Water, plates of food, and sometimes he’d pick up his cane with the gold handle, and swing it around and if you are an octogenarian that gets struck in the head, no joke.

And all the time he’d be yelling “help me.”

Meanwhile, the guy next door continues to yell Alexa all morning. I put my Marshall over-the-ears headphones on while I write this stuff just so I can think.

Don’t ask me where I am; I am essentially in hiding for a while from creditors. However if you know a good bankruptcy lawyer feel free to send me their name and number.

It’s a good location. Better than I realized. I can almost walk to get my infusion for Crohn’s which I get every two months (I can really only walk about two blocks before I have to sit on the Rollator, but my range is improving. )

I wrote a snippy answer to the photographer who asked where I was and I said, Mexico.

Reminded me of a story about B. Travis. He wrote Treasure of the Sierra Madre while living as a recluse in Mexico. John Huston and (it might’ve been Jame Agee?) went to a small village, and found his address, knocked on the door and were greeted by a man who said Travis was out, but he’d see if he could find him.

Eventually, the man came back and said Travis wasn’t around. Didn’t know where he was.

Huston decided to stick around and after nosing around found that the man who had answered the door was B. Travis, and eventually they purchased the rights for the movie from him. Anyway, that made me snap Mexico.

My name is David Beckerman. I am a fine art photographer working in New York City. Or I was before I had two strokes. I now write from Assisted Living. 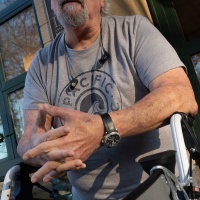 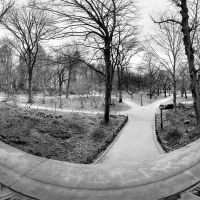