Beck woke in the middle of the night in what he thought was his own room, but quickly realized he had been dreaming. It wasn’t his own room any longer it was an institution for the poor and old.

What had woken him up was the creak of the door opening slowly an a lone eyeball peering in through the crack at him. He rolled over in the over-soft bed, and looked at the face of his cell which told the time in big letters: 12:25 a.m.

Beck had gone through some sort of vortex after his two strokes. It was now nearly four months after that and one consequence of the strokes was that all his little fears and most if not all of his phobias had vanished.

After being stuck in every conceivable spot, and practically electrocuted by the neurology team, after being used to teach spinal taps to new med students, and learning to enjoy infusions.

After somehow making it through a month of “rehab” run by the Catholic Church Archdiocese. And struggling up to a two-floor walk-up with the help of Marlene, a health aide who was like a gladiator; he was ready for anything.

He had stopped taking his anxiety pills for weeks at a time. This was going to work out in the new institution. He would make it work.

But now, after a series of screw-ups at the place they simply called Castle Vista, Assisted Living, he lay awake, like the first night he had arrived, staring up at the white stucco ceiling.

Beck opened an app on his phone to keep track of how many times he was spied upon by “blue coats” during the night and for what possible reason other than to drive him crazy, which he now realized it was doing. He had never had the slighest symptoms of paranoia but the next eyeball appeared in the door at 2 a.m. and then wordlessly closed the door (not all the way, just enough so that the next eyeball wouldn’t have to turn the handle).

It had been like this every night since his arrival but only recently, since yesterday was it getting on his nerves. What happened yesterday?

He went to his blister pack and took another dose of anxiety medication.

It made him calmer, but not sleepy.

At around this time of the second eyeball, the usual night noises began: a frail but insistent voice that he’d discovered was coming from the room directly above his, and could be traced to the kitchen vent.

He got out of bed with his cell and recorded the sounds emanating from the vent. They were faint, but they were real.

You didn’t hear it outside his room because the hall air conditioner was set to 54F.

Beck’s door opened again for another eye at 4 a.m. and over and over until the night shift went home at 6 a.m.

Then, while dressing and half naked, the door opened to ask if he was going to breakfast. The first breakfast is at 7:15 a.m. but the first reminder is at 6:15 a.m.

And there was a bit of a scandal when a group calling themselves Alpha, showed up with a film to prostelitize Jesus.

end of chapter 1 – subtitled Grand Illusion or Great Expectations. Yes it could wind up with elements of K. and the Castle, but I suspect I shouldn’t do the Kafka thing at my time of life. 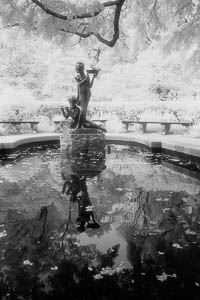